Lights Out, Party Moving Down The Street

This blog is going dormant. If you want to keep up on the goings-on with the North Central Chapter of the National Cartoonists Society, please follow us on Facebook and Twitter. That's where all the fun is. See you there!

Posted by Cedricstudio at 8:53 AM No comments:

This past weekend I drove down to Kansas City, MO for the Fall Cartooning Weekend sponsored by the North Central Chapter of the National Cartoonists Society. The main event was an afternoon of lectures hosted at the offices of comic book syndicate Andrews McMeel Universal, the company behind GoComics. 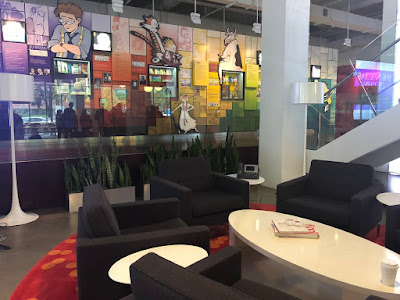 The main lobby features a giant "timeline wall" highlighting the syndicate's most popular strips from the past several decades, in chronological order. Among them were Ziggy, Garfield, For Better or For Worse, Calvin and Hobbes, The Far Side, Doonsbury, Pearls Before Swine, as well as modern webcomics like Sarah's Scribbles, The Awkward Yeti, and Phoebe and her Unicorn. 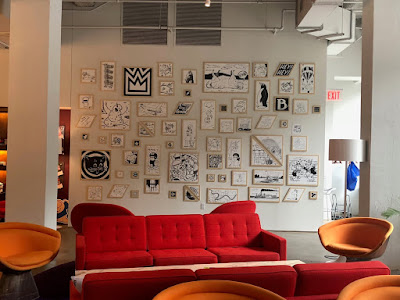 There's also a giant wall featuring drawings by their most popular cartoonists, past and present. 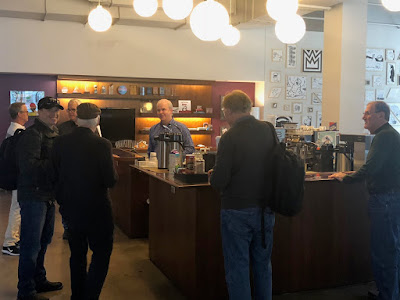 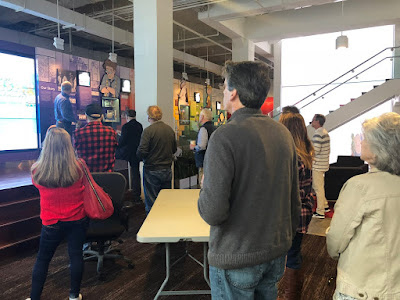 John Glynn, president of Andrews McMeel Universal, served us assorted beverages and gave us a guided tour of the syndicate offices. 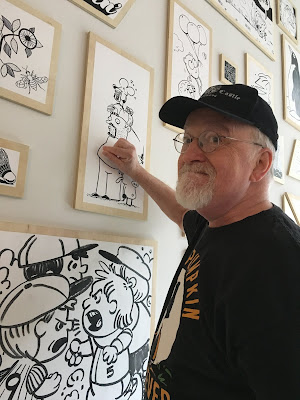 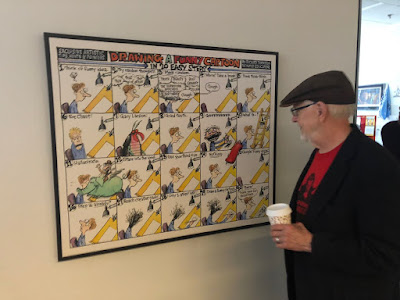 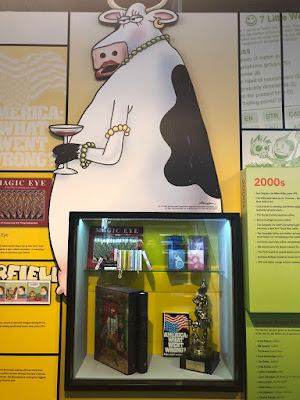 In the lower right corner is Gary Larson's Reuben Award, the most prestigious award the National Cartoonist Society can bestow. 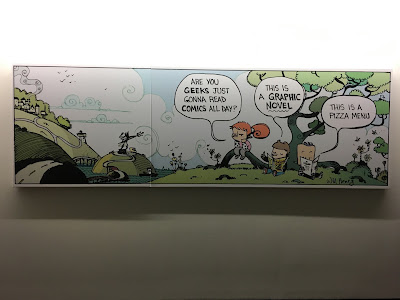 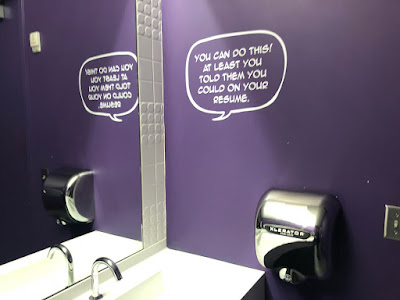 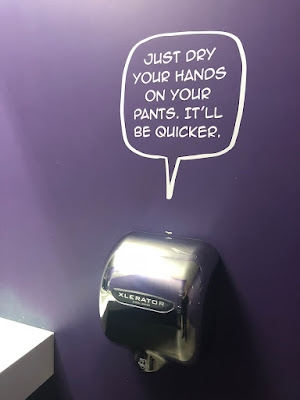 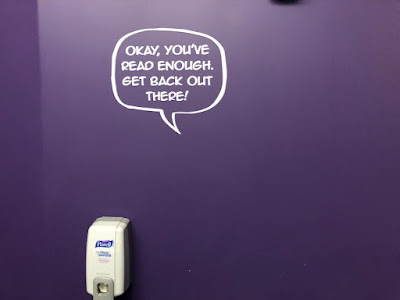 The staff never stop thinking about comics, even on bathroom breaks. 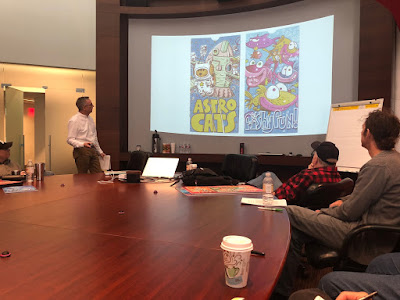 After the tour we gathered in the main conference room. Cartoonist Eric Scott kicked things off with a prevention of his licensing art, his work for clients like MAD Magazine, as and samples from his syndicated strips Back in the Day and 1 and Done. 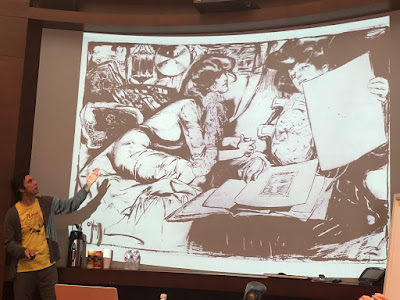 University of Nebraska Professor Richard Graham discussed the life and work of illustrator Rose O'Neill, who's Kewpie Doll characters launched the first big licensing craze in American history. Graham is working on a book about the Kewpie Dolls that will be released in 2019. His previous book about World War II propaganda cartoons was an Eisner Award nominee. 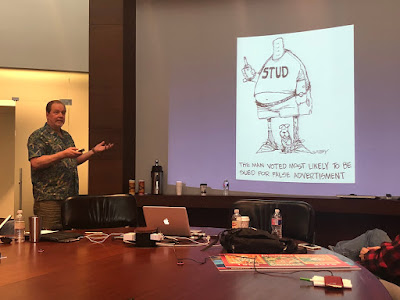 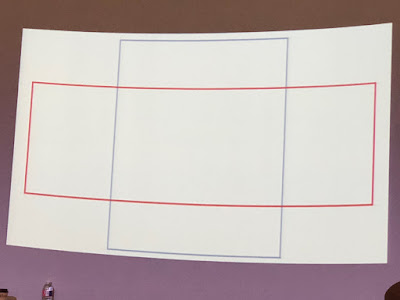 Miller designs his gags to work in both horizontal and vertical formats. Using this template, he keeps the main art in the center square and puts one copy of the caption/punchline in the edge of the horizontal zone and another duplicate copy in the vertical zone. 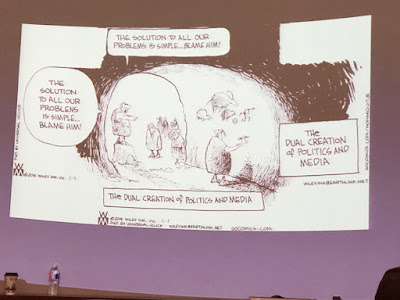 Here's an example of how that works. The cartoon is designed so publishers can crop it two different ways. 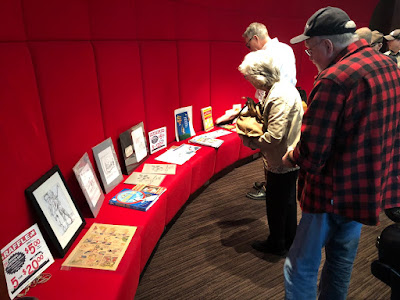 After the presentations several cartooning books, prints, and original art were raffled off to raise funds for the chapter. 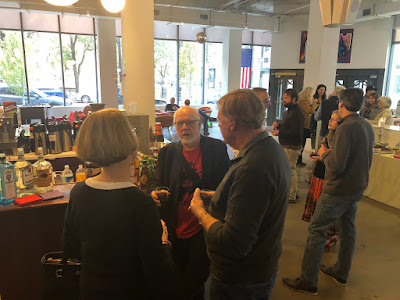 The day ended back in the lobby with a catered dinner and cocktails, again courtesy of the fine folks at Andrews McMeel Universal.
Everyone drove back home really jazzed and inspired to keep cartooning!
Posted by Cedricstudio at 10:51 AM No comments:

NOTE: Info about the event has also been posted on our chapter Facebook group. You can also follow our chapter on Twitter to see member tweets and general retweets of interest to cartoonists.

It's time again for our far-flung NCS chapter to gather for our annual cartooning weekend!


MAIN EVENT (Open to the public):  Hear some talks by professional cartoonists and hang out with other cartoonists and cartooning fans (it's also a fun way to check out the NCS if you have ever thought about joining.) Come to Andrews McMeel Universal Syndicate for a great lineup of speakers:

Richard Graham, Univ. of Nebraska Professor and author of a new book on Rose O’Neill, Illustrator and inventor of the Kewpie Doll:

The weekend will also include a chapter meeting (NCS members only) and lots of socializing over meals and drinks (open to NCS members and anyone interested in joining the NCS).

10:00am - Meet in lobby at Andrews McMeel Universal Syndicate, 1130 Walnut St, Kansas City MO 64106 (Google Map). If you are driving in for the day there is a city parking garage right across the street from the AMU offices.


HOTEL RESERVATIONS:
We have a block of rooms reserved for chapter members just a couple of blocks from Universal Syndicate headquarters where we'll be meeting. The rate is $129 per night single or double. Valet parking is $18. There are also city parking garages nearby that will be cheaper. Deadline for reservations is September 12. Mention you're with the National Cartoonists Society to get the discounted rate.

This past weekend chapter members from all over the midwest gathered in Lincoln, Nebraska for our annual chapter get-together. We viewed an exhibit of comic book art by Dan Hall, listened to presentations by three speakers (John Hambrock, Tom Kerr, and a keynote by award-winning New York illustrator Steve Brodner), and engaged in the usual tomfoolery.

During out chapter meeting it was announced that at the national level the NCS is taking steps to adapt to cartooning in the 21st century. It sounds like the leadership is thinking about what it can do to offer more value to web cartoonists as well as to adjust to the changing industry landscape. That was good to hear.


Everyone had a great time. Thanks to co-chairs Paul Fell and Mike Edholm for all their hard work in making it all happen!


Posted by Cedricstudio at 4:19 PM No comments:

NOTE: Info about the event has also been posted on our chapter Facebook group. You can also follow our chapter on Twitter to see member tweets and general retweets of interest to cartoonists.

It's time again for our far-flung NCS chapter to gather for our annual cartooning weekend!

We will be inviting the public to join us at the Univeristy of Nebraska Love Library for a great lineup of speakers including John Hambrock (syndicated cartoonist, "The Brilliant Mind of Edison Lee"), Tom Kerr (illustrator/cartoonist), and for the keynote, political illustrator Steve Brodner.
The weekend will also include a chapter meeting (NCS members only) and lots of socializing over meals and drinks (open to NCS members and anyone interested in joining the NCS).

10:30am - View exhibit of new comic work by chapter member Bob Hall on second floor of library. (Open to the public).

5:30pm - Walk from hotel to nearby restaurant (to be announced) for drinks and dinner.

Following dinner we’ll sample the offerings of some of the
drinking establishments in Lincoln’s Haymarket area.

Heading for home
HOTEL RESERVATIONS:
A block of rooms is available for chapter members at Lincoln's newest hotel, The Graduate (formerly the downtown Holiday Inn). The hotel is a short walk to Love Library, as well as a multitude of restaurants and drinking establishments. Book before Sept. 8 and get a special room rate of $119 per night.
To make room reservations:
The Graduate
141 N. 9th. Street
Lincoln, NE 68508
402-475-4011
https://www.graduatehotels.com/lincoln/
Ask for the special room rate for The National Cartoonists Society.

We hope to see you there! 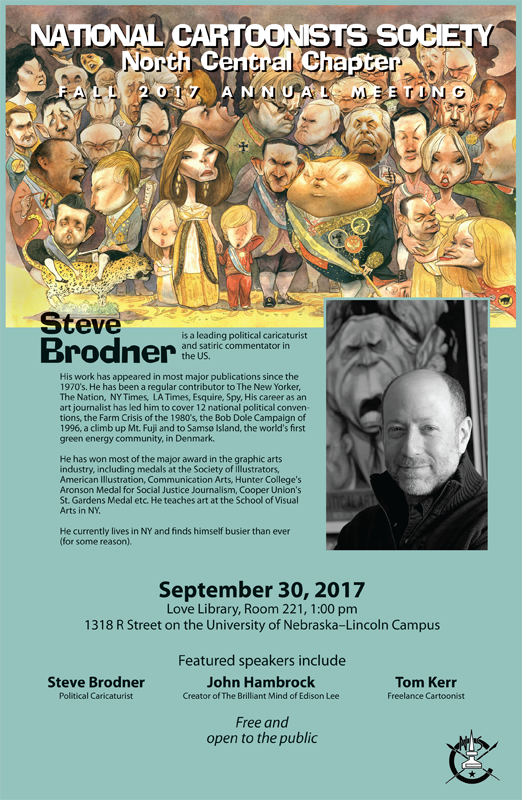 Posted by Cedricstudio at 5:50 PM No comments:

Another Chapter conference is in the books! Everyone had a fantastic time. Here's some pics courtesy of Mike Edholm and Cedric Hohnstadt:


A huge shoutout to Paul Fell, Mike Edholm, and Ken Alvine for working hard to make our meeting such a fun and enjoyable time!

Posted by Cedricstudio at 2:08 PM No comments:

For immediate release
Cartoonists conference scheduled for Sioux Falls
Saturday October 29th
The North Central Chapter of the National Cartoonists Society is having its annual chapter meeting in Sioux Falls Saturday Oct. 29th. All the conference activities planned are open and free to the public.       Professional  cartoonists from across the Midwest will be in attendance. These cartoonists work in the field of syndication, editorial, magazine cartooning, illustrator and others aspects of the industry.   The public will have a chance meet and greet the cartoonists and get signed cartoon art Saturday morning at Zandboz bookstore downtown Sioux Falls from 10:00 to 11:30.
Saturday afternoon from 1:00 to 4:00 at the Downtown Public Library three nationally recognized  cartoonists will make presentations.  Steve Sack , Pulitzer Prize Winner editorial cartoonist from the Minneapolis Star Tribune, Paul Trap, creator of the syndicated comic strip “Thatababy” and Richie Graham, University of Nebraska professor,  “How cartoons have been used in the war effort” will speak.  Raffle for cartoon items and art will follow the presentations.
For more detailed information about the chapter meeting, contact Ken Alvine at kenalvine@gmail.com. 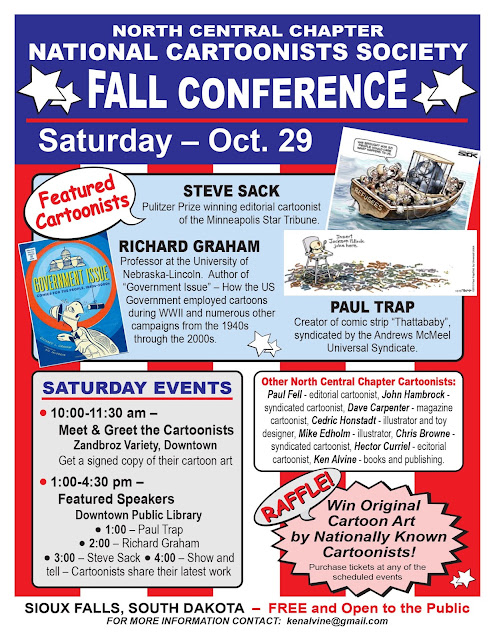 Posted by Cedricstudio at 11:37 AM No comments:

News, announcements, and occasional craziness from the National Cartoonists Society's North Central Chapter. Geographically, we are the largest chapter in the organization but we also like to think we have the most fun! 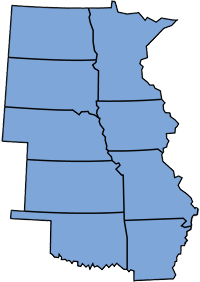